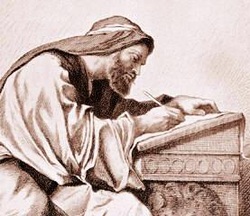 "Give me one hundred preachers who fear nothing but sin, and desire nothing but God, and I care not a straw whether they be clergymen or laymen; such alone will shake the gates of hell and set up the kingdom of heaven on earth." - John Wesley

"It is nothing less than self-idolatry to conceive that we can carry on, even in the ordinary matters of everyday, without God's counsel." - Charles Bridges

"As regards salvation by justification we are Lutherans. In baptismal formula, we are Baptists. As regards sanctification, we are Methodists. In aggressive evangelism we are as the Salvation Army, but as regards the baptism in the Holy Spirit, we are Pentecostal.” - T.B. Barratt  (Pioneer of Pentecost in Europe).

"Were Wesley, Whitefield, Finney, Hudson Taylor special editions of ministers? Never? If I read the Book of Acts aright, they were just the norm." By Leonard Ravenhill

He leadeth me! O blessed thought!
O words with heavenly comfort fraught!
Whate'er I do, where'er I be,
Still 'tis God's hand that leadeth me. —Gilmore

My Lord is ever with me
Along life's busy way;
I'll trust in Him completely
For guidance day by day. — Anon

"The only vision (many) of you have is television." L. Ravenhill

"The 'easy believism' and 'positive confession' theology has sold the church the lie that faith is some kind of force through which man can manipulate the God of heaven. The idea of faith being and impersonal force is appealing to the carnal man because it can be used to his own ends." - B. H. Clendennen

"True love has its source in Christ Himself. It is therefore bold in defence of His truth, and knows no man after the flesh when His honour is to be maintained or defended." - R.C. Chapman

"Only the bridling of the heart can effectually bridle the lips." - R.C. Chapman

"The secret of lasting fellowship is that Christ is the life of it." - R.C. Chapman

"The Great Commission is not an option to be considered; it is a command to be obeyed." - Hudson Taylor

I have but one passion: It is He, it is He alone. The world is the field and the field is the world; and henceforth that country shall be my home where I can be most used in winning souls for Christ." - Count Zinzendorf

A fire is self-announcing." LR

A lost reputation is the best degree for Christ's service." - C.T. Studd

"Dogmatism is no alternative to devotion." - J. Brice

We profess to be strangers and pilgrims, seeking after a country of our own, yet we settle down in the most un-stranger-like fashion, exactly as if we were quite at home and meant to stay as long as we could. I don't wonder apostolic miracles have died. Apostolic living certainly has." — Amy Carmichael

The sanctified body is one whose hands are clean. The stain of dishonesty is not on them, the withering blight of ill-gotten gain has not blistered them, the mark of violence is not found upon them. They have been separated from every occupation that could displease God or injure a fellow-man." - A.B. Simpson

"There must come a violent break with the irresponsible, amusement-mad paganized seudo-religion which passes today for the faith of Christ and which is being spread all over the world by unscriptural men employing unscriptural methods to achieve their ends."- A.W. Tozer

"Experience supplies painful proof that traditions once called into being are first called useful, then they become necessary. At last they are too often made idols, and all must bow down to them or be punished." - J. C. Ryle

"Human religion’s enterprises have an atmosphere of earthiness about them. It despises the day of small things and scorns little humble people and lonely ways. It is eager to jump to the height of prosperity..."

"Christians should be grave and serious, though cheerful and pleasant. They should feel that they have great interests at stake, and that the world has too. They are redeemed—not to make sport; purchased with precious blood—for other purposes than to make men laugh. They are soon to be in heaven—and a man who has any impressive sense of that will habitually feel he has much else to do than to make men laugh...The true course of life is midway between moroseness and levity; sourness and lightness; harshness and jesting. Be benevolent, kind, cheerful, bland, courteous—but serious. Be solemn, thoughtful, deeply impressed with the presence of God and with eternal things—but pleasant affable and benignant. Think not a smile sinful; but think not levity and jesting harmless." —Albert Barnes

‎"The profaneness of the times should not slacken but heighten our zeal. The looser others are, the stricter we should be." - Thomas Watson

"One of these days some simple soul will pick up the book of God, readit, and believe it. Then the rest of us will be embarrassed." — Leonard Ravenhill

"Compromising with the world to avoid misunderstanding has never advanced the cause of Christ." B.H. Clendennen

"There is blood on the hands of the 21st century Church; it is the blood of the unreached perishing millions. Two thousand years ago Christ gave the Church the assignment to disciple the nations, today two thousand years later there are over two thousand million souls who have not heard the name of Jesus...These perishing billions are seldom mentioned or thought about in most churches. There is little prayer for missions, and only one cent of every one hundred dollars given to religion goes to missions, yet more than fifty thousand perish without Christ every day." - B.H. Clendennen

"Never did God so manifest his hatred of sin as in the death and sufferings of his only-begotten Son."- Jonathan Edwards

"One of the first signs that a man is ceasing to be truly evangelical is that he ceases to be concerned about negatives, and keeps saying, We must always be positive." - D.M. Lloyd-Jones

"I charge every loyal member of the Church to open his eyes to the peril in which his own Church stands, and to beware lest it is damaged through apathy and a morbid love of peace. Controversy is an odious thing; but there are days when it is a positive element. Peace is an excellent thing; but, like gold, it may be considered too dear. Unity is a mighty blessing; but it is worthless if it is purchased at the cost of truth. Once more I say, Open your eyes and be on your guard." - J.C. Ryle

"To pursue union (unity) at the expence of truth is treason to the Lord Jesus Christ." - C.H. Spurgeon

"Men will readily rally around any one who can give the least appearance of plausibility to any doctrine that will teach them that they can be assured of happiness...though their hearts and natures are unchanged, and though they live without God in the world...” - Alexander Hislop

"It is impossible to preach Christ, except thou preach against antichrist." - William Tyndale

"Truth without enthusiasm, morality without emotion, ritual without soul, make for a Church without power." ~ Samuel Chadwick

"No man is ever fully accepted until he has, first of all, been utterly rejected." - Author unknown

"God give me a deep humility, a well-guided zeal, a burning love and a single eye, and then let men or devils do their worst." -George Whitefield

"Nothing is more contrary to a heavenly hope than an earthly heart." - William Gurnall

"Live near to God, and so all things will appear to you little in comparison with eternal realities." - Robert Murray M’Cheyne

"When I am in the cellar of affliction I look for the Lord's choicest wines." - Samuel Rutherford

"I do not listen to a man who tells me how to solve the world’s problems if he cannot solve his own personal problems.  If a man’s home is in a state of discord, his opinions about the state of the nation or the state of the world are purely theoretical." -Martyn Lloyd-Jones

"Probably you yourself are the only one in the whole world who considers your opinion as the best. persons with many opinions, ideas, and subjective thoughts are to be feared. They like to be counselors to all. They seize upon every oppurtunity to press their ideas on others." watchmen Nee

We can never be filled until we have room for God. Every blessing begins with great sacrifice, great severance, and great dispossessing of this world." - B.H. Clendennen

"Character is what you do, when you think no one is looking." - B.H. Clendennen

"Is not the setting up of self, our own reasons, our own wills, and bowing down to them, and serving them, as much a wrong to God, as the bowing down to a senseless image!" - Stephen Carnock